Situated in the beautiful nature in Telemark and Sandsetdalen. A popular area for fishing and hiking.

The dam was made by Folldal mining in connection with mining in the Tverrfjellet mine at Hjerkinn. The vaste from the mine was deposited in the Hjerkinn Dam, an artificial lake and sludge pond. Mining started in 1964 and ceased in March 1993.

Hjerkinn is located at the highest point at the kings road to Trondheim.

Haldammen is an old listed damsystem for timber floating. There has been activity here since the first water wheel and a mill was built in the 1600s. In 1804 the first dam was completed and the floating was continued until 1981.

Today you can see some old huts and the dam itself. Some of the huts is open to the public to use for accommodation and bonfires. Space for 2 campers for overnight stay in the free parking lot. You have to pay a small access-fee to use the gravel roads for access into this site.

Every year, in early June, “Haldamsdagene” is arranged. While these are going on, old traditions of craftsmanship is shown and visitors can try out different old craftmanships. During these days timber floating is also demonstrated, and the timberslip over the Haldamstupet takes place when the water in the dam is released.

Near point of interest

Freecamping at the parking area for the recreational area of Bøsanden - One of the natural wonders of northern Norway.

The road down to this freecamp is narrow and with relatively deep wheel tracks. Not suitable for the largest motorhomes. It is not allowed with camping at the parking, but there are a lot of opportunities in the grassy area around the parking itself.  On days of warm and sunny weather, this is a popular spot for bathing and hiking. This is also a perfect place to enjoy the sunset and possibly the midnight sun.

Located at the western side of Engeløya (translates to: Angel island). See also the sidebar under “More Info” for link to other spetacular places in this part of Norway.

This is a popular spot for starting a canoeing or fishing expedition into the wilderness at “Femundsmarka National Park”.

Formed in 1971 to protect the lake, forests, marshes and mountain peaks of the area around Femunden. This 573-sq-km park is often overlooked by foreign tourists – despite the fact that it’s been named one of the three best hiking areas in Norway.

The area, situated between the border with Sweeden and the cities of Trysil and Røros, has 67 mountain peaks and two national parks, Femundsmarka and Gutulia. Hiking, canoeing and cycling hardly become more family-friendly than here.

Flyfishing in the rivers is popular. In addition, there are more than 900 beatiful waters and Norway’s third biggest lake “Femunden”, trafficked by the ferry M/S Fæmund II built as early as 1904. Here ant in other waters you can expect fish species like trout, char, grayling, whitefish, perch and pike.

Geitvika freecamp are located in Skjervøy municipality in Troms county. This area of Norway is a natural gem with great opportunities for recreation with fishing and hiking. See sidebar under More Info for more information.

Rennesøy is an island muncipality in Rogaland county located near the city Stavanger. Since 1992, Rennesøy municipality has been connected to the mainland by a series of bridges and undersea tunnels. The European higway E39 connects to the island of Vestre Bokn via a ferry connection.

In Norse mythology, Freyja (Frøya) is a goddess associated with war, death, love, sex, beauty, fertility, gold, and sorcery. Freyja is the owner of the necklace Brislingamen, rides a chariot pulled by two cats, is accompanied by the boar Hildisvini, and possesses a cloak of falcon feathers.

The island of Frøya offers great fishing opportunities – whether you like deep sea fishing or inland fishing. Rent a boat and fishing gear and join local fishing guides out on the open sea who know where the big fish bite.

With its wide range of local food manufacturers and high-quality restaurants, Trøndelag can rightfully be called a culinary region. If you want to please your tastebuds, we suggest you visit some of the various shops selling local produce from farmers and small-scale producers.

A large gravel space often used as a freecamp, well retracted from the road.

Located in Gloppen municipality in Nordfjord in Sogn og Fjordane.

Gloppen is the site of Karnils burial mound (Karnilshaugen). Karnilshaugen or Tinghaugen på Hauge is located on the Hauge farm west of Sandane. Karnilshaugen is probably one of the ten largest mounds in Nordfjord. The burial mound was built on top of Tinghaug, the site of a Thing (assembly). Tinghaug was a place of public gathering, for cultural events and religious actions.

Skarsvåg is the world's northernmost fishing village, with approx. 90 inhabitants. The place is located at the Risfjorden on the northeast side of Magerøya in Nordkapp municipality in Finnmark.

From Skarsvåg, it is 14 km to the North Cape Plateau and this is a great free site to stay overnight in connection with a visit to the northernmost point of the continental Europe.

There are no facilities for motorhomes or campers, but there is a shop and cafe in the harbor. The area is well suited for hiking. “Kirkeporten” or The Church Gate is a 45 minutes hike northwards or it is nice to walk around in the harbor. “Kirkeporten” is a geological treat; a several meters wide break through a rocky ramp formed as a large gate. Through this gate the midnight sun shines between 2400 and 0200. 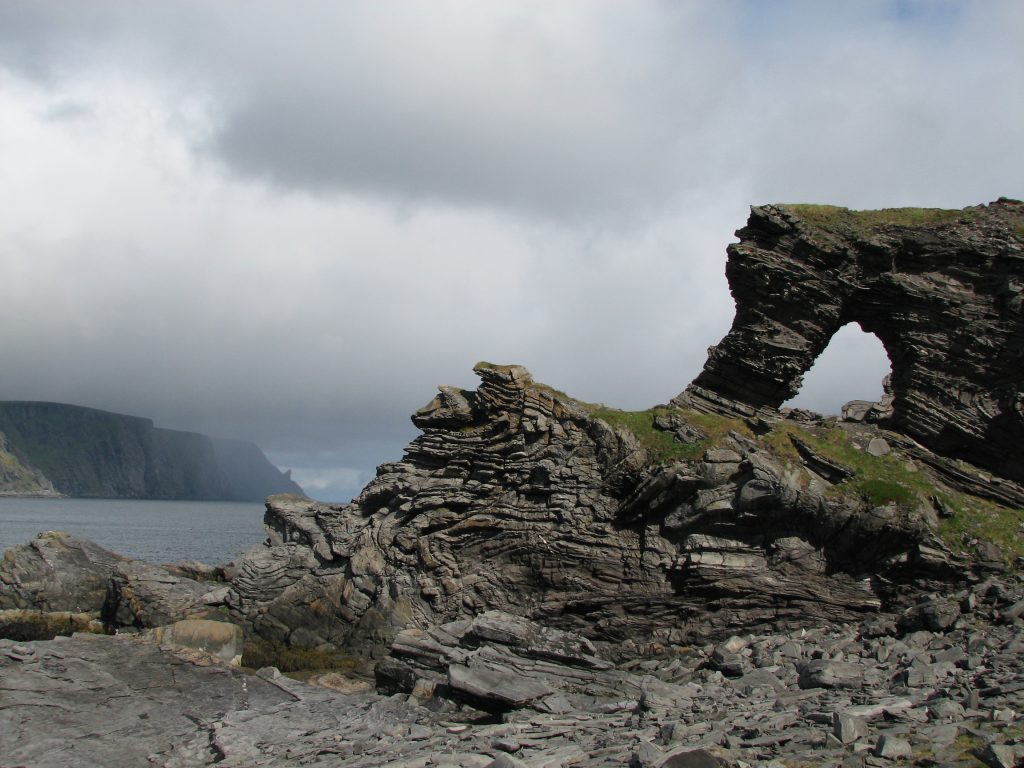 Near point of interest